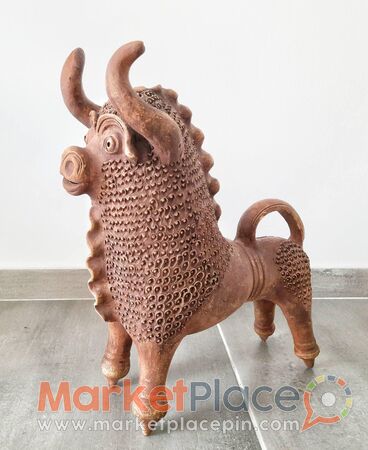 Huge, massive, stunning in its beauty and originality, the Bull sculpture, made in the form of a traditional Ukrainian vessel, Kumanets. The unique work of the Honored Master of Folk Art of the Ukrainian SSR, the most famous Soviet and Ukrainian potter, the oldest potter of the Poltava region Mikhail Yegorovich Kitrish.

The sculpture is made entirely by hand by the famous master of ceramics.

The sculpture is in excellent collectible condition. No cracks, chips, signs of restoration. Slight wear on the glaze on the back of the work. There is no lid.

The work is completely complete!

On the side of the work with a chisel in the dough is the author's stamp of the master.

Kitrish Mikhail Yegorovich was born on October 21, 1936, in the urban-type settlement of Opishnia, Poltava region, in the family of a potter: father Egor and grandfather Vasily were local craftsmen. He became interested in modeling at the age of 12, when he fell seriously ill and was bedridden. He began to sculpt whistles, at work he forgot about his illness.

He studied pottery with Iosif Stepanovich Marekhi, where he mastered the production technology, the technique of engobe, glazing, and drawing to perfection. He worked in the field of sculpture, arts and crafts (ceramics). Production of traditional household items, dishes in the form of lions, bulls, rams and goats, supplementing the long-standing traditions of plastic art with decoration techniques.

The artist's products are marked by the beauty of the silhouette, the plastic perfection of the stucco decoration (vegetative motifs predominate), and the sonority of flowers. He also created jugs, pots, vases, bowls, coffee and tea sets, candlesticks. I used colored clay and watering dark brown, blue, green.

In 2011, Opishna hosted an exhibition dedicated to the 75th anniversary of the birth of the famous potter.

In 2011, by the Decree of the President of Ukraine, a two-year scholarship was awarded to the Honored Master.

Was awarded and awarded:

Honored Master of Folk Art of the Ukrainian SSR (1985);

State Prize of Ukraine named after Taras Shevchenko in 1999 for the cycles of works of poshnenskaya ceramics;

Lived and worked in Poltava.

The sculpture was brought from Ukraine. I'll pass it on in person

Please login to send a message to the owner of this ad.
Sign in
Post an ad in the category "Pottery, Porcelain, Glass"
€6.500
96xxxxxx
WhatsApp
Start chat
Lada
Offline
Active: 2 hours ago